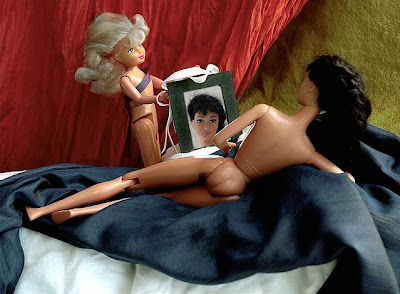 Kristyna Milde is a Czech multi-discipliner artist who owns a very genuine style and a huge plastic versatility. Her work explores several sources of creation and inspiration; consumption, mass culture, women image, the auto-perception into the world, the culture models… Reflective, critical, even incisive, but at the same her work accumulates magic and almost childlike sweetness: no doubt she attains her artwork by talking itself.

Q - Kristyna, would you please tell us just a bit about your career. How did you start in the artistic world?

A - I am coming from a creative family; my mother and my younger brother are both artists. My mother is a painter and she also writes poetry. My brother is a conceptual artist working with the theme of personalizing the urban environment.

I have been creating things since I was really young – drawings, paintings, sculptures. It was the most natural way of expression for me. I started to take various courses and finally decided to study painting. I went, along with my future husband Marek, to Basel Switzerland to study at the Assenza Malschule and spent four years there. After that we moved to New York and went to the MFA program at the Queens College, where we both graduated in 2007.

Q - Many of your works use Barbie dolls, Action men, or their accessories to be developed. Why do you use these tools for your creations? What are the meanings or intentions?

A - When I was little, there was still a communism in my home country. The market was very limited. I played with simple toys, most of them made by my mother or grandmother. I also had some old toys. After therevolution in 1989 the market was suddenly overflowed with the western products I was shocked by the amount of things and commodities, and the mechanisms of a quick disposal. I mean, after the period of restriction, everything was suddenly allowed. People started to buy things, they could not even dream of before. Instead of one type of yogurt you have 20. I guess people were also disoriented, they did not know what is enough. So on one side you have this hyper consumption and on the other side you have the disposal of "old" things, which are not "god" anymore. And we end up in the cycle, which can't really fulfill anything. I think that is why I feel still quite sensitive to the overpowering market production, and its effects on the human behavior. In my view kids playing with toys are not just playing, they are learning and absorbing specific perspective of reality given by the producer. Children project their self-image onto the doll in an attempt to identify with it, which often results in a so-called Barbie syndrome: the child longs for having the same physical appearance and social status as the doll. The plastic toys, especially Barbie dolls, in my opinion symbolize the dark side of commodity exchange. By placing them in a different context in my artworks, I am trying to disclose the nakedness and emptiness of such things.

One of the inspirations for this part of my work is a book called “Momo” by Michael Ende. The girl Momo has the gift to listen to people in such a way, that they start to understand themselves better. She lives in an old amphitheater and has almost nothing, but she also does not need much. The only think she really needs is friendship. There are Grey Men in the city, stealing time from people. Momo, who tends to spend time with playing and listening to stories, gets uncomfortable for them and they are trying to get rid of her. First they separate her form her friends by making them too busy to come and play with her. When she is quite alone, they come with a car full of stuff and give her the perfect doll. Momo tries to play with her, but the doll says the same things over and over again. She only wants to get more clothes and accessories. Finally, Momo gives up and gets bored, which never happened to her before.

I think that this story is quite significant as it says a lot about our social and cultural behavior today.

Q - Specifically in works like cUMENI or The Tribuna of the Uffizi, what do you try to transmit/denounce?

A - cUMENI combines two seemingly different approaches of depicting women: the history of European painting and modern pop culture. The word čUMENI, plays in Czech language, plays with the words art and gaping. In this project I critically examine how modes of representation distort our perception of women. The Barbie doll plays the role of historical icons in recreations of world famous paintings.  The presented ideal manipulates a woman’s concept of her body and creates an artificial identity. This model reduces a woman to an object of desire and visual pleasure and has a negative effect on her self-image.   As traditionally recognized media; paintings sanction the male gaze, which would be considered voyeurism in other contexts.  Using the historical painting as a stage, with a female icon represented by the modern Barbie, I want to show the similarities between stereotypical representation in the past and in the present time. I am also interested in how playing with artificial mass produced toys influences the youngest generation. What ideals are they identifying with? What consequences does it imply for their development? With cUMENI I want to inspire contemplation and reconsideration of the visual culture and its impact on the formation of identity and gender relations.

A - 2009 marks the 50th anniversary since Ruth Handler designed the Barbie doll. I was thinking: How strange, that the doll did not age since then? She still looks as fresh as in the late 50s; a symbol of never aging beauty. So I decided to confront the idealized image of the Barbie Doll, the symbol of successful consumerism, with the everyday reality. I asked myself how would a person, who would live the life of the character of ”the perfect consumer” looks like in its fifties. I focused on the gap between the dream, the prefab ideal of consumerism, and the real process of ageing and deterioration. There is a photograph in the 1959 series, where Barbie is celebrating her birthday with a huge cake in her apartment. In my project, she does not look like Cinderella, but rather as a middle-aged woman she is supposed to be. Her body is affected and transformed by the reality of her life. She is obsessively shopping and over consuming the products of the never-ending sales and media spectacle. While obeying the rules to became the perfect consumer, she turns in to an absurd character fulfilling the imperative to enjoy!

“Diet, injections and injunctions will combine from a very early age to produce the sort of character and the sort of beliefs that the authorities consider desirable and a serious criticism of the powers that be will become psychologically impossible.”

Bertrand Russell, “The Impact of Science on Society” 1952 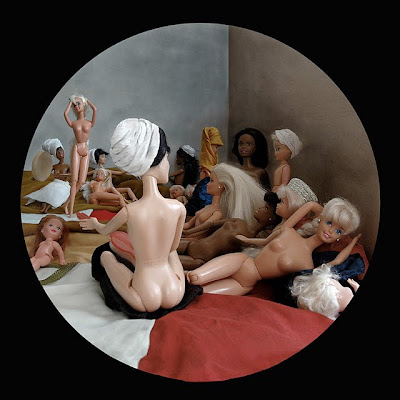 Q - There are many other artworks not related to Babies nor dolls, but with women. For example Her Hair, where you show your creations developed with hair. Tell us a bit about this project.

A - In the project “Her Hair,” I have worked with female hair using various medias such as photography, installation, and animation. It explores my identity in the relationship to the outer world. The perspective of my body and my personal experience is the starting point of my exploration. I use the feminine attributes to deconstruct our images of identity and cultural conventions.

I see the hair as a mediator between my own body, the outside and myself. The hair is part of my identity, something familiar, but it also has its own life. It is growing, expanding into the space. In the project “Her Hair”, I want to stretch the possibilities of the physical limits of hair. The underlying content focuses on the psychological aspects of physical experience and the search for emotional closeness and connection.

The perspective of my body and my personal experience is the starting point of my exploration. I use the feminine attributes to deconstruct our images of identity and cultural conventions.

Q - What are you currently working on? And are there any future projects?

A - One of the projects I am currently working on is “The Tribuna of the Uffizi”. I am recreating a painting byJohann Zoffany from 1772-8. It portrays the Uffizi Gallery in Florence with the major paintings and sculptures from renaissance and antiquity. It is a very complex project; because I am restaging every single painting in the picture and afterwards I will recreate the whole piece in 3D. The final presentation will be a large-scale photograph. Zoffany's painting can be used as an illustration of the eighteenth century idea of the "masterpiece”. Zoffany is creating a conceptual framework to parallel the classical ancient and renaissance tradition. He is trying to justify the idea of cultural continuity. By replacing the human figures in the paintings by contemporary toys, I am adding a new layer of reference to deconstruct the idea of a masterpiece.

Q - Your works are exhibited to the public in the flickr’s account from MILDEART, what is exactly MILDEART?

A - MILDEART is a loose name, which combines my and my husband’s work. It derives form our last name Milde. We are collaborating on most of our projects. Each of us has an individual art practice, but we are always conceptually and practically helping each other. We also have some projects where we are “officially” working together.

Q - Are currently any other exhibitions/galleries where we can find your artworks?

A – During this month my husband and I we are participating in a one-month work-in-progress residence at the Queens Art Center in New York. We work on a project called “Looking for Home”, which deals with the theme of consumerism and mechanisms of disposal. We will create an apartment room furnished solely with furniture found during the period of one month on the streets of New York. It will be followed by a group show in May at the same location. I was also featured in the March issue of the Godele Magazine in Belgium. The article has 6 pages with large size photos of my cUMENI.

A - This is a very complex issue, with a wide range of angles. I had the possibility to get the know some of the mechanism in the art market and I would say that the experience was rather controversial. I think that is very important to differentiate between the creation of art, the presentation and the market. Each of them has a specific rules and problems. It is a very competitive and selective system.

Collector wants to be a curator, curator wants’ to be an artist and artist wants to marry a collector.